Outlook 2013 is being used with an IMAP Gmail account. A month ago this message came up, Outlook would not start. I did the online repair, and it worked ok for a month. Now it is doing it again. I expect that I can reinstall, or maybe create a new profile to fix this. But it seems to me that there may be a Windows issue if it happens twice like this.

Are any windows updates waiting to be installed? That will cause this error.
Diane Poremsky [MVP - Outlook]
Outlook & Exchange Solutions Center
Outlook Tips

Diane Poremsky said:
Are any windows updates waiting to be installed? That will cause this error.
Click to expand...

I've been getting this on various 32 and 64 bit Office 365 machines for a month now. Last part is "An unexpected error has occurred."

Been getting that on different Win 10 pc's with different builds and versions of Office for last several weeks. Some 32 and some 64 Office.

MS escalation tech working on it is stumped so far.

I'm giving up on Outlook on my main machine and limping along with Win 10 mail I've wasted so much time trying to fix.

I would definitely try the first one if you have a business account - the support and recovery assistant (it's also linked on the Help menu in current versions - Support Tool).
L

Are there different flavors of SARA ? Yes I have an E3 account so that tool is available, though I assumed any Office 365 account could use SARA?

The SARA tool that tier 2 always tries is SetupProd_OffScrub.exe (or is that the uninstall tool?)

I'll try the one you suggest. This issue has been unresolved for close to two months now of calls with MS. They've ruled out back end corruption etc.
Haven't tried on a fresh install of Win 10 but have tried on fresh Windows 10 profile.

Only occurs when we add a second mail box to the profile. Deleting profiles and ost's fixed the issue for anywhere from an hour to 3 days. Outlook doesn't crash but won't reopen after nomal exit. Safe mode without addins makes no difference. Clean automated and or manual uninstall then reinstall makes no difference. 32 or 64 bit Office no difference.

If you delete the second mail box Outlook opens fine. Making us suspect something funky with that other account.

BUT while haven't been able to thoroughly test, appears that creating a new profile with only the formerly secondary mail box does not have the issue.

SARA (not the one Diane suggested) , and the detailed diag logs that were running before and after issue supposedly are normal. OWA normal. Win10 mail can handle both accounts at once no problem.

Tech today thought I should try a new profile with the formerly secondary mailbox installed as the primary one. Then add the formerly primary one. Unfortunately that introduces a whole other set of issues and makes it easy to send mail with the wrong "sent by" address. Plus a hundred emails showed up in the new Outbox which were actually sent ok a month ago.

Maybe a windows thing but all 4 pcs are at most 2 year old hardware with anywhere from standard release Win 10 to slow channel Windows Insider. Office 365 is slow channel monthly. 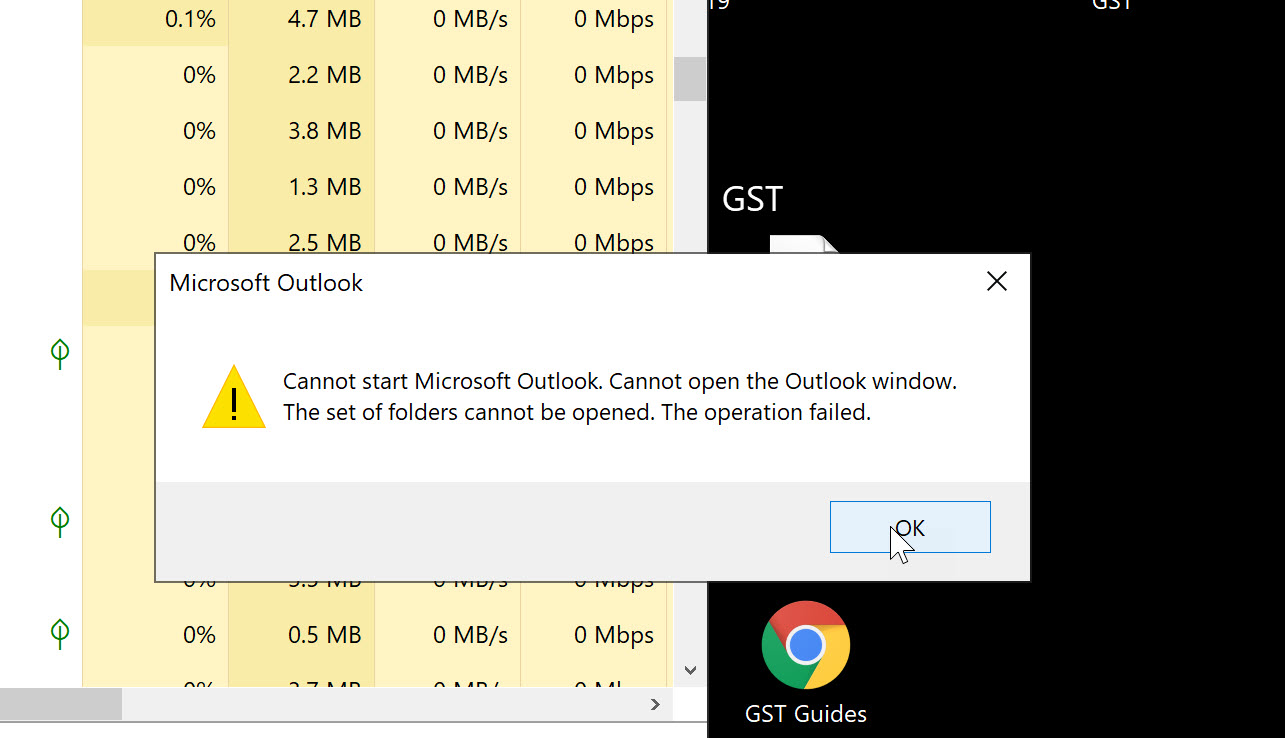 btw, one tier 2 (who also ran "fidler traces" saw something in the logs that he thought wb fixed by running outlook.exe /resetnavpane , which was also mentioned in an old post on this site. It didn't.
L

Definitely a different version of SARA because your version actually came up with errors.

Wierd error but an error:

"1. Your Outlook profile is not configured with Use Exchange Cached mode
Cached Exchange Mode give users a seamless online and offline Outlook experience. It also insulates users from network latency and connectivity issues while they are using Outlook. By caching the user's mailbox and the OAB locally with Cached Exchange Mode, Outlook no longer depends on continuous network connectivity for access to user information. While connected, Outlook continuously updates users mailboxes so that the mailboxes are kept up-to-date.
Please follow instructions here to turn on Cached Exchange Mode. "

Wierd because I always make sure caching is enabled and set to maximum. (setting to less seemed to make some contacts folders disappear and re appear)

There are different builds as they update it but if you download from Fix Outlook and Office 365 problems with the Microsoft Support and Recovery Assistant for Office 365, it should be the newest build. SaRA doesn't work with all account types- and is most suited for Office 365 business mailboxes. It should detect some Outlook.com issues.

offscrub is the "easy fix it" uninstall utility.

This is the newest link for SaRA from the link above - https://outlookdiagnostics.azureedge.net/sarasetup/SetupOutlook.exe
I thought it used to be a different name/extension, but i could be misremembering and can't recall which extension - I'm pretty sure it was not *.diagcab, which is what some of the fix it's use.

Len Raphael said:
btw, one tier 2 (who also ran "fidler traces" saw something in the logs that he thought wb fixed by running outlook.exe /resetnavpane , which was also mentioned in an old post on this site. It didn't.
Click to expand...

i can't see how a fiddler trace would detect a resetnavpane issue.

Len Raphael said:
Only occurs when we add a second mail box to the profile.
Click to expand...

When you switched the profile to have the second account first, did it work ok - other than the issues involving having the wrong account set as default?