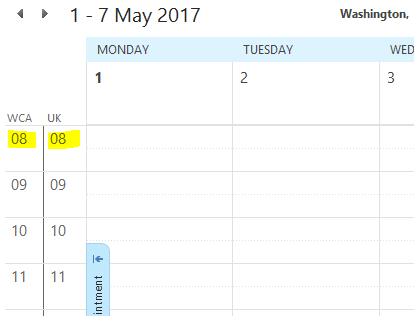 Assuming you have the right time zone selected, did one switch to DST or Summer time and the other not?

i get the same results when i change my outlook - which is to be expected if london is on "summer time" and WCA is not. London on DST would move ahead one tz and would go from 0UTC to +1UTC

I don't know what cities are in WCA, but you can look them up on this chart - The World Clock — Africa and compare with your local time.
A

The city is Johannesburg +1 hour than London.
According to the site:
Daylight Saving Time (DST) Not Observed in Year 2017
Johannesburg currently observes South Africa Standard Time (SAST) all year.
DST is no longer in use.

What can we do in the outlook to show the right time zone?

Many thanks
Goncalo
A

Just to add London is in Summer time period, from March to October. During this period the clock is +1 hour.

So the problem isn't with outlook, it's that windows 10 lists some TZ by city and some by name and johannesburg and cape town apparently aren't important enough to list by name. I know they have limited space and can't list all of the cities, but I would expect either cape town or johannesburg. (WCA apparently doesn't have any cities worthy of being listed, so they used the region name. Sad.)

It definitely would be better if they used the old way of TZ name and cities. (I didn't check to see how windows 7/8 does it - i know really old windows versions used tz names and cities.)
A

I didn't see Pretoria in the list thanks
I was looking for cities with +1 hour because I know that Johannesburg is +1, I never thought looking for +2 hours.

This happens only because the British Summer Time, right?
If the "adjust for daylight saving time automatically" was OFF in windows all the times would be UTC time and in that case +2 is correct.

Yeah, i had to took over it twice before i saw it. It doesn't pop out like johannesburg would.

Alexandre said:
If the "adjust for daylight saving time automatically" was OFF in windows all the times would be UTC time and in that case +2 is correct.
Click to expand...

It's highly recommended you leave DST enabled if your TZ support DST. As long as you use the correct time zones for the locations, outlook and windows will correctly adjust the appointments. It's very important that you use the specific tz for the area, not just any that is +2 (or +0) as the listing would include the dst settings - if you use the correct one for london and the correct one for SA, everything should work perfectly, at least going forward. Appointments created in the wrong TZ will need to be fixed.

I had someone in the Cayman islands using Eastern with dst off because they didn't want to use the correct one for their region because it had Bogota in the name and felt the Bogota time zone name made them look untrustworthy. They had a lot of problems with meetings because outlook made the wrong adjustments. (Pick your Outlook time zone wisely)
Last edited: Apr 25, 2017

< Outlook does not open the .pst file created by the Outlook | Spacebar Not Scrolling Down >
Similar threads