Sooo frustrating! I've been patiently waiting for the fix for the annoying issue that came with reconnection issue back in January (?):
"The sending "From" account always defaults to Outlook.com account when replying or forwarding an email from another non-Outlook.com account."
(It's the ninth issue in the Known Issue list)

Supposedly, the fix came out a week or so ago -- I got the "we need to close to update" message several days ago.

It didn't resolve the issue for me. OU 2016 restarted after applying the update, and I also rebooted my machine. The issue persisted, so I checked again for updates -- there are none.

Any suggestions and/or am I missing something?

I cannot adequately convey how frustrating this issue has been for me. The only reason I have an Outlook.com address in the first place is to sync my Outlook 2016 Calendar & Contacts between my desktop, laptop, SP3, and Windows Phones -- I don't use my Outlook.com to send/receive email at all. But, for the last several months, every single time I reply to or forward an email, I have to switch from outlook_ugly.com addy to the appropriate email account.

this is what i needed to know. Right under the build #, it should say something like Current, Insider, Deferred - what does your say?

Deferred gets the updates later - Version and build numbers of update channel releases - (looks like you are on Deferred). 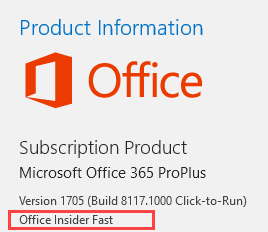 Thanks! Ahh -- yes, I'm on deferred, darn it. I'm not sure I'm correctly interpreting, but it looks like maybe . . . just maybe . . . the update will make it to me in a couple of weeks? I'll keep watching.

I wasn't too excited about early retirement at 57 in about a year & making the transition from a work-based subscription, but I suppose it's time to start exploring alternatives. I've been a dedicated Office user going wayyy back to something like version 3(?) and hopped on the Outlook bandwagon in a big way when it came out a couple of years later. It's mostly been an incredibly love affair (there were a few flirtations on my part but I never defected), but this last bit may be the beginning of the end. The non-work collaborations I work with now are mostly with (much) younger people who have drunk the Google (& Evernote) Kool-Aid & chuckle about me adamantly sticking with Office. I definitely don't want to lose my Calendar, which contains a huge chunk of my life, but going forward, maybe I need to look at more "modern" alternatives. A couple of years ago, my ESP added a CalDAV Calendar function -- I've never played around with it because I loved the power of OL, but maybe it's time.

Nonya said:
the update will make it to me in a couple of weeks?
Click to expand...

Your next update will be in about 2 weeks, which i believe might be a few builds older than what you need for this. You might need to wait a couple of months, or more.

BTW, the big problem with caldav is having something that will sync to your desktop and devices - outlook might be able to connect to it, but can't write to it. It should work with phones.