A few days after starting to use 16.0.12112.20000 (but not exactly coincident with it), I noticed that the space between the folder pane and the message list suddenly looked a lot wider, like this:

Before, the unread count was always much closer to the folder names, and much of the intervening space (which I highlighted in yellow for this screenshot) wasn't there.

You might think, well, just drag the divider left. It doesn't go any further.

Now here's the weirdest part: once in a while (perhaps 1 out of 20 times that I ran Outlook in testing), it'll be back to normal again. Very little space between folder name and unread count, and free movement of the divider. But it only lasts until the next time your run Outlook.

I have another profile that I never use, but I switched to it for testing, and it does the same thing, so it shouldn't be the profile (and even if it was, there's nothing to explain how it magically works fine sometimes). I've installed subsequent Office Insider builds (this is on Win10 Insider) but have seen no difference. This feels like a bug to me, but I'm unsure.

yeah, one of the builds - i didn't write down which one when it first came out- changed the formatting in the folder list.

This is as small as it goes - then its minimize or turn it off. I have not noticed the size changing at all - is always this size, with this much white to the right of the numbers - which turns into a scrollbar when i hover over it. Oh.... that is it, at least for favorites.

I removed a folder so there is no need for a scroll bar and the white space narrows.

You don't mean this, right? I forgot all about it (or didn't even notice it).

In 2016, the Folder Pane (earlier called Navigation pane) line spacing is really far apart, much greater than my previous 2010, and greater than the listing of emails to its right. (I hope I'm calling this the right thing- folder vs navigation pane). For someone who has MANY accounts and...

I should have mentioned that a friend on the same builds as I have does not see what I'm seeing. I don't think it can be intentional, since it makes no sense to have a huge space there.

Do you actually see it, too?

That article touches on some of the changes but not this one. I don't see the width jumping around - just white space where the scroll bar is - mouse over and the scroll bar comes up. It could be a bug - or you may need to reset the navbar. That's a PITA if you use a lot of favorites though.

Do you both have the subscription version? I'll check the retail version in the morning - it might have the old format, where the number was next to the folder name.
R

It's the white space to the left of the numbers that's variable.

We both have the same Insider version that we get through work (Office 365 subscription). If I'm the only one seeing it though (it doesn't appear that you are), then I guess, somehow, the problem is here.

I noticed when testing in the other profile, that I'm more apt to get the "correct" look (with either profile) upon first run after changing the profile setting in Control Panel from "Always use" to "Prompt". Not that I can just leave it on "Prompt" forever and never have the issue. It seems to relate to the act of changing it, which makes no sense whatsoever.

Here's the correct look in both profiles. Notice that it's about half the distance between the folders and the numbers compared to before. 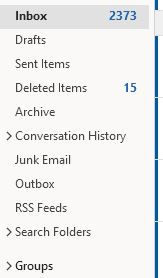 I would try resetting the navpane.

Close Outlook. Right-click on the Start button and choose Run or press Windows key + R to open the Run command. Type or paste the following into the Open field and press Enter or click OK to restart Outlook. (There is a space before /.)

Note: This will wipe out all folders on Favorites in Mail module and reset the Calendar and Contacts modules to the default format.
R

Good thought, but no change. It's still luck-of-the-draw (and you may increase your odds with the Control Panel trick).

I wonder if this relates to the recent relocation of the Search box. In all my Outlook restarts, I've noticed that it's shifting around. More often than not, when the folder pane is back to normal, the Search box is back to its traditional position atop the folder pane. I kind of prefer it there, actually. It would be nice if it was a choice.
R

I've resorted to coming up with a deeply stupid "solution" for this weirdness. A batch file that automatically opens Mail in Control Panel, pauses, then runs Outlook.

I'm curious if you can still accomplish as little separation as you showed in your Oct 1 post, or if the folder names and the unread count are now forcibly socially distanced from each other to the absurd degree that I showed.

I really dislike this state, since the space wasted in the folder pane directly takes away from the width of the reading pane. Sure, you can widen the reading pane, but then the message pane suffers.
R

I narrowed the issue to something in the Registry. After a lot of experimentation (no pun intended), it turned out to be this:

Specifically, the experiments feature. Deleting the cache items wasn't enough though, I actually had to also set it to be disabled. I doubt I'm missing much by doing this, as features usually lag with my installation anyway.
L

I have the same issue. The folder pane is far too wide and i cannot drag it to reduce the width (dragging any further left causes it to minimise).

This (wide folder pane) happened after my system restarted for some updates.

I have reviewed the article you posted the link to, however, the registry locations mentioned in the article do not seem to exist on my PC.

Please could you let em know if you were finally able to sort this issue out?

rseiler said:
I narrowed the issue to something in the Registry. After a lot of experimentation (no pun intended), it turned out to be this:

Specifically, the experiments feature. Deleting the cache items wasn't enough though, I actually had to also set it to be disabled. I doubt I'm missing much by doing this, as features usually lag with my installation anyway.
Click to expand...

luvnik said:
I have reviewed the article you posted the link to, however, the registry locations mentioned in the article do not seem to exist on my PC.
Click to expand...

That page was modified a few days ago, and the entire section that was referring to experimentation was removed. You can still see them in the lone feedback comment though, which I'll reproduce here in case it disappears too:

Please add it to the article
Click to expand...

What I've learned since my last comment is that disabling experimentation doesn't really matter, since the above items come back regardless. So what I've done is setup a batch file (must be run as admin) to delete the two lines that really matter for this specific issue. One of these two lines may not exist at the time you look, but it may in the future (it seems random), which is why I include both. I run the batch pretty much once a day before starting Outlook.

The experiments keys will be updated on the next restart - so yeah, they are temporary.
R

Retail license being Office 2016 or 2019? If so, no, I'm on subscription with Insider. I'm glad to see they're introducing more people to this perfectly sensible feature. I felt guilty hogging it all by myself.

Many many thanks indeed rseller...

I deleted all the Keys you listed and this solved the issue magically! Really appreciate your prompt response.

It did come back, as you said, when I started Outlook again, and this time I only deleted the Configs Key and it worked.

Thank you for the batch file too, but I am not a techie so have no clue how to run these kinds of files. I can barely use Outlook!

Quite happy to delete the Configs Key every time I restart Outlook if it avoids messing up the batch file.

Thank you once again for the help - much appreciated!

then use that to open outlook instead of the outlook shortcut.
R

One enhancement that I made to that batch eventually, once I remembered that Outlook would be running as admin and that that maybe isn't a great idea, is to add this line to the end:


Code:
Where machinename, username, and password are swapped out for your particular ones.

That will run Outlook without elevated privileges despite the fact that the batch necessarily is running elevated. It leverages this little portable jack-of-all-trades utility, which I always have somewhere in the path (c:\windows is fine):

NirCmd is a small utility that allows you to do many useful tasks from command-line, without displaying any user interface: change your display settings, turn off your monitor, open the door of your CD-ROM drive, and more...
www.nirsoft.net

rseiler said:
Outlook would be running as admin
Click to expand...

Why is it running as admin? The batch worked for me without running it as admin.


You can use a reg file - you double click to run then open outlook using it's shortcut.

You must log in or register to reply here.
< Remove flag automatically | Sent emails show iCloud mail account not the alias >
Similar threads