Firstly, this is a question relating to Outlook not Tumblr although I'll explain where Tumblr comes into this throughout this question. Also to clear any misunderstanding of the thread title, this isn't about copying/drag/dropping pictures from the Tumblr website into Outlook. SO, here goes. I have 20 pictures in a Folder called '2Publish' (a Folder '2Publish' within the 'My Pictures' Folder on my PC). I press CTRL+A to select all the pictures in the '2Publish' Folder, I then hold down the left button on the mouse and drag/drop the selection directly into a Folder within Outlook called 'Tumblr'. So far so good, this works. Note here: although all the pictures are now in the 'Tumblr' Folder within Outlook, they are not messages/emails; they are .JPG files within the 'Tumblr' Folder. The next thing I do is to Categorize all the drag/dropped pictures with a green flag. I then have a rule I run that forwards all 20 pictures (from the Outlook default email account) and that are green flagged to my Tumblr Publishing Blog email address. So far, this works. Outlook send all 20 pictures individually (not as a single email with 20 attachments). But .. this is where something goes wrong. When I now check my Tumblr Blog, none of the pictures have been published. I have tried both the 'Forwarding' AND 'Forwarding as an Attachment' option within the rules; still, this doesn't work. What does work (and isn't the way I want) is the long manual way to get all the 20 pictures published on my Blog only if I sit there and manually create 20 new email messages attaching each picture to each email. Any ideas why manually sending emails individually works yet having Outlook do it all but running a rule doesn't work?

I have no idea, but I've never posted to my tumblr account using email.

Do you need the images in Outlook or is this just a way to make a rule work?

if the images are attached (not embeded), a send to shortcut that used the tumblr address would save time.
http://www.slipstick.com/outlook/create-a-custom-send-to-shortcut/

The other option is a macro - i have macros that create new mail - I'll see if i have one that can do it with files on your hard drive.
Diane Poremsky [MVP - Outlook]
Outlook & Exchange Solutions Center
Outlook Tips

Hi Diane. Thanks for your reply.

The weird thing is .. if I manually create 2 emails and each email has a picture attached, send them to my Tumblr Account, those two pictures get published. However, if the same two pictures are sent (Outlook Rule) using either Forward OR even Forward as an Attachment .. that doesn't work.

Ok... working with the 'insert newest file' macro at the end of http://www.slipstick.com/outlook/email/create-new-message-using-html-file-stationery/

I tweaked it to create a message for each png file in a folder. BTW - you can change png to jpg and you'll need to change the folder path.

It won't identify images previously sent, so you need to copy them in then delete them when finished. if this is something you only do once a day (and send them immediately), you could check the last modified date and only send ones modified today.

Get the instructions (you need to set the reference to the scripting runtime) and the macro from the link I posted and replace the end of the macro (starting with strFile line) with this:


Edited: if the folder only holds pictures, you don't need to check for the file extension.

' End If
Next fsoFile
End Sub

(I added the full macro to the end of http://www.slipstick.com/developer/macro-send-files-email)

FC-16 said:
Hi Diane. Thanks for your reply.

The weird thing is .. if I manually create 2 emails and each email has a picture attached, send them to my Tumblr Account, those two pictures get published. However, if the same two pictures are sent (Outlook Rule) using either Forward OR even Forward as an Attachment .. that doesn't work.
Click to expand...

it is weird. oh... open the messages in the sent folder - do the ones the rule sent say RTF in the title bar? That would cause problems.
F

I'll have to enable the saving of sent messages in settings to try that. If I want to keep a record/copy of an email I send I manually click on 'tags' from one of the Tabs of the message and select Save copy of sent message.

ok, found out. 'RTF' is Rich Text Format? ... so if an email is auto-forwarded by Outlook by a rule; how can you tell Outlook to change the format i.e. 'RTF' or say 'HTML'.

RTF is rich text format. Only outlook can use it.

You don't need to change it to check, unless you are curious - but I'm betting it is the reason. In any event, there are better ways to do this.

I found a macro I posted a while ago that also does this - http://www.slipstick.com/developer/macro-send-files-email/

In File, Options, Mail, near the bottom: When sending messages in Rick Text Format to internet recipients should be set to HTML. Assuming this is already on HTML, the problem is the rule and you might not be able to avoid it.

Are you using a contact to supply the tumblr address? You could try setting the contact to always use plain text. See http://www.slipstick.com/problems/outlook-is-sending-winmail-dat-attachments/ for the steps to change it in outlook 2010. (near the end of the article.) If that doesn't fix it, then you'll need to use the send to shortcut method or a macro.
F

So I was wondering, you have a Tumblr Blog? How about you trying out for yourself uploading some pictures to your Tumblr Blog if I give you a step-by-step way I do it. That way maybe you can see something I can't?

Hi Diane, that be great. I'll put together a step-by-step guide and upload it here.
F

So this is what I'm doing. In the first screenshot I've re-sized Outlook and the Picture Folder for convenience .

Simply, there is a Folder called 'Tumblr' created in Outlook which is located in the Outlook Data File ... this Folder is not a Folder created within an email account.

Now look at the first screenshot (Screen-1). I select all pictures in that Folder, hold down the left mouse button and drag/drop them all into the 'Tumblr' Folder within Outlook. That works ok, fine so far ... (just something to wonder about here, you see all the pictures in the picture Folder are .JPG files/images and have the Windows default icon next to them, however, when they're dragged/dropped into Outlook, they have a blank/while icon next to them?)

Now look at the second screenshot (Screen-2). This is the Rule that Outlook runs. There are only 2 rules in there and in fact only 1 rules need to run ... I'll point out here why you can see all the pictures that have been dropped into the Outlook 'Tumblr' Folder are colored green and that is because when the rule is run it only forwards messages that are colored green and not send everything--when setting up the rule initially, there is nothing I want from the list of first rules; Outlook will warn you of this but it's ok to click 'next' at that stage.

Finally, run the rules and you'll see in the 'Outbox' Folder in the Outlook Data File now has 56 items or however many pictures you've initially drag/dropped into the 'Tumblr' Folder to be sent individually.

And it works, Outlook sends them all one-by-one.

... BUT, although they all get sent and proof can be seen by looking in the 'Sent' items Folder ... none of the pictures appear on your Tumblr Blog.

If the screenshot pictures are too small to see, I can email you the originals which are clear full size screenshots. 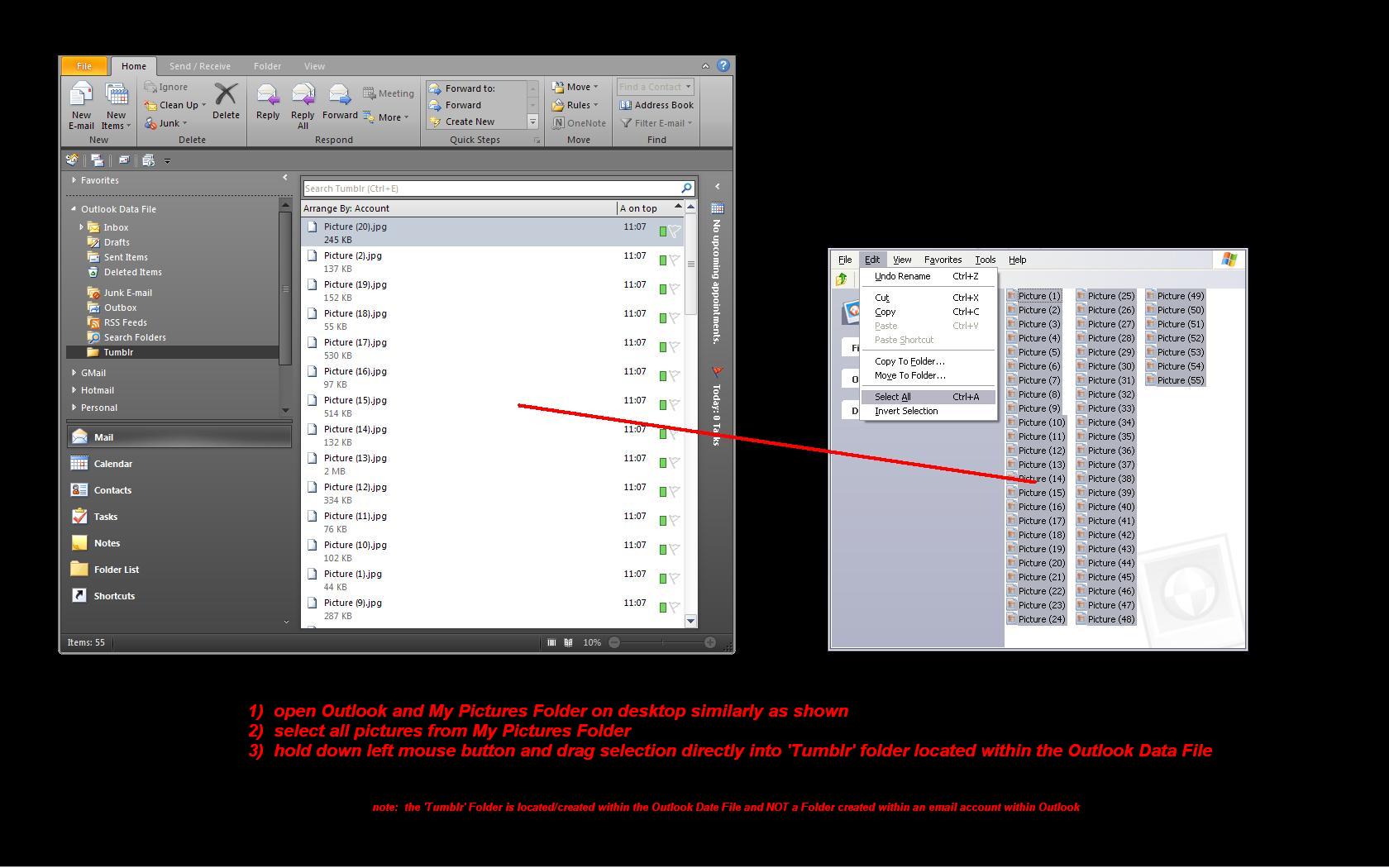 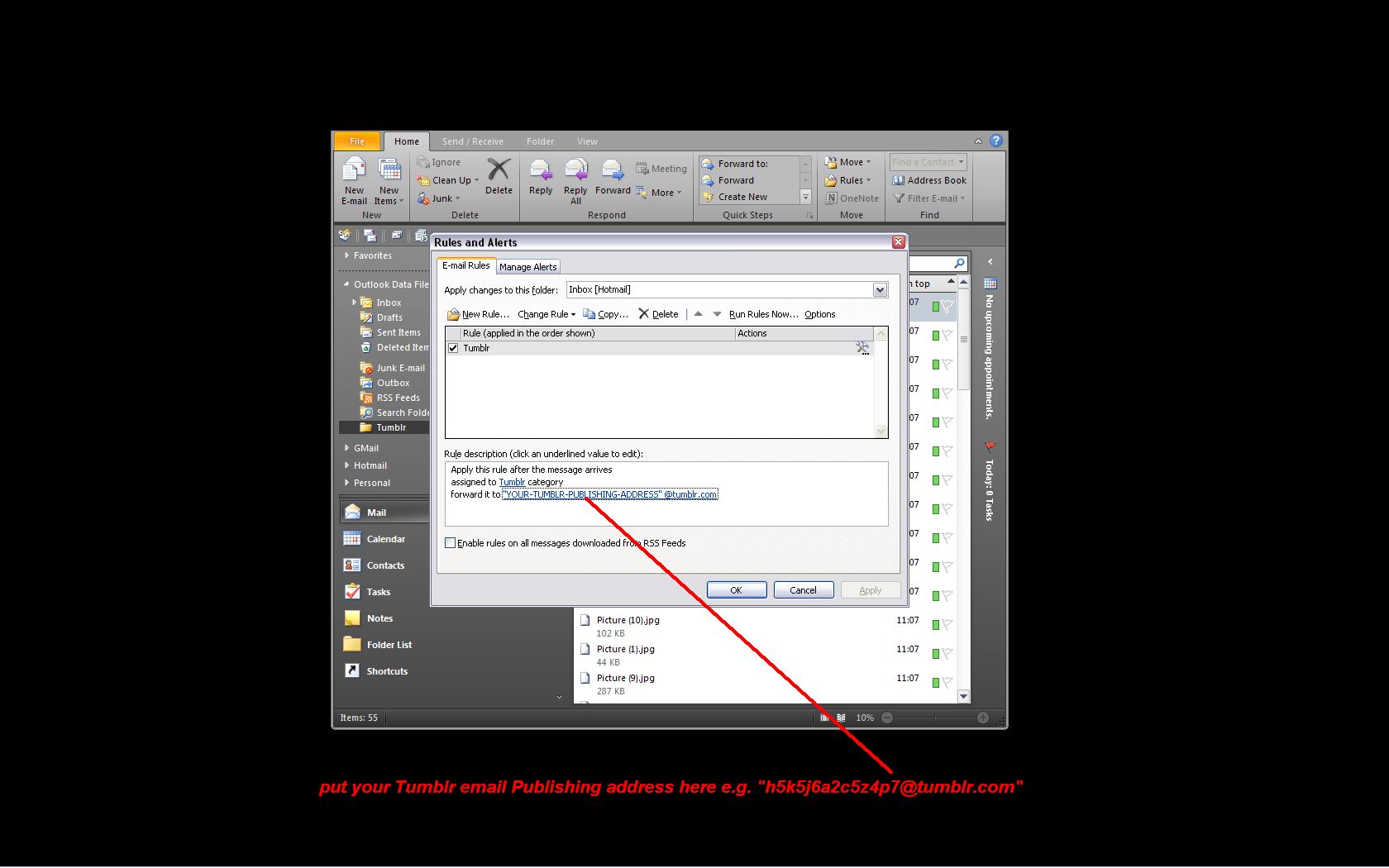