Bullets Being Changed to Rectangles

I recently updated to Office 2016 from 2010. In both Word and Outlook, my bullets are not displaying correctly. They are showing up as rectangles. I did not change any of my fonts, add fonts, edit fonts, etc. All I did was upgrade. The bullet is using the Symbol font which I'm assuming just like it did in 2010. 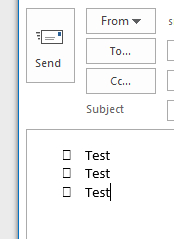 In other programs such as WordPerfect, Google Docs, etc. the bullet is appearing with no issues. When I pasted the list in this email, it works OK.
I do not know what other programs are using for the bullets, but it seems I only have the issue in Word/Outlook. I tried PowerPoint and the bullets look OK.

Also, when I receive emails, the bullets are also show up as rectangles not just when I create an email /document.

I have the latest version as I just checked for updates.

I have not tried a repair since when I tried to repair Office 2016 (had some initial issues) previously, it did not repaired it. I saw the dialog noting being repaired, etc., but when it was done Office 2016 was removed.
S

I created a new bullet using Calibri which seems to work when sending emails. Is that OK or should I use Arial which is installed on Windows? I'm not sure if all computers would have Calibri.

Not sure if this will work for emails received that use Symbol for the bullet.

I'm not sure why Symbol isn't working - it should. Arial might be better, but it really depends on who you correspond with. If they all use windows, it shouldn't be a problem.

Were you using a custom template? The default is symbol and it is working here (which was a clean install of Office 2013 or 2016).
Diane Poremsky [MVP - Outlook]
Outlook & Exchange Solutions Center
Outlook Tips

Thanks for your help.

No templates. As a test, I deleted all my bullets from Word library. It seems Outlook uses the same library. I then recreated the Symbol bullet in Word and below is what I saw in Word and Outlook. I did some searches and others also seems to be having the same issue with the bullet not appearing correctly.

Consensus seems to be that the font is somehow damaged. What OS are you using? It seems to be a bigger issues with win 7/8, not 10.

The list data is apparently stored at %appdata%\microsoft\word, in a file called listgal.dat. if the font is damaged, it won't help to delete that though.
S

Thank you. I am using Windows 10 (all updates).

Not sure how I can fix the font.
S

Diane, I think I got it fixed based on your feedback.

cool. I was going to tell you that you could try replacing them, but that i didn't expect it would help since you are using windows 10. I like being proven wrong.
S

Hope you are well.

Unfortunately the issue came back again. I made no changes other than running updates on Office 2016. I tried the idea about reinstalling the fonts, but that did not work.

which version are you using now? (Current, insider, etc) and the build #? It's in File, office accounts
S 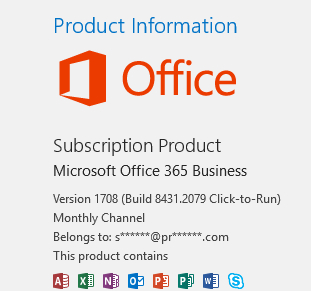 Thanks. I'll see if i can repro and see if support has any information.
S

I have read multiple people having the same issue. I cannot find any fix that resolves the bullet issue (I think I tried all of them). Have you heard of any update?

I have not heard anything. Sorry. If you have the insider build installed, use the File, support option to report it as a bug.
S

Thank you. I do not have the installer build. I appreciate you getting back with me.