A friend had a huge amount of folders in the Inbox of a Gmail IMAP account that was slowing things down in Outlook 2013. I created a .pst file and started moving the folders into it by dragging and dropping them, one at a time. But with some of them, when I drag them over, they are empty, no emails are in them. When I drag them back into the Gmail IMAP inbox, then the emails are there again.

I've tried waiting about 10 minutes to see if the emails appear if I just leave the folders in the pst file, but to no avail. Out of 25 folders that I've moved so far, this has happened in 3 of them.

I'm guessing the folders aren't fully synced when you drag. How many do you need to move (compared to the total number)? Either use Export (won't delete mail from server) or Archive (deletes mail from server) to move the contents to a pst.

Or... if he doesn't need all of the contents in outlook he has two options: unsubscribe from some folders (mail is still on gmail, just not in outlook) or set gmail to only sync the last 5000 or 10000 messages.
Diane Poremsky [MVP - Outlook]
Outlook & Exchange Solutions Center
Outlook Tips

There are about 50 folders that I need to move, I'm not sure what you mean by "compared to the total number". But these folders are all of the folders in a Gmail account that she is not using anymore. I'm moving them to another partition on the same hard drive, to free up space on the C: drive.

Exporting them sounds like a good way to try it, since it seems safer. But will they export if they are not synced as you suspect? Although I am not sure why they would not be synced, they are from years ago.

And do I do the export the usual way, using the Import/export wizard?

You would use the import/export wizard - in 2013 it's at file, open (or open & export) - you can either export the entire account or do it one folder at a time - doing all will be easier - start the export and go for lunch.

Export will get the message body if any messages are header only.

The folder question was wondering if you planned to move like 90% of the folders, 50%, or only 10%... if you are moving a good portion of the folders in her mailbox (or archive), then export is the way to do it - you can delete the folders you don't want in the pst.

Does she need those folders in Outlook? If they are old mail that she needs to keep but don't need constant access to, she can unsubscribe from the folder - the messages will be in gmail.com if she needs them. Right click on the inbox folder, choose imap folders - click Query, select the folder then click unsubscribe. 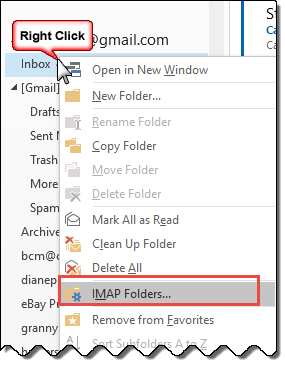 Thanks for the reminder about using Export. I tend to forget about it and drag folders instead, which is time consuming.