Sent emails not reflected in all IMAP Folders

I have configured my wife's personal email account to use IMAP on her 4 devices.
Office Surface Pro with Outlook 2016
Home Office Desk top with Outlook 2010
Travelling Surface Pro with Outlook 2016
BlackBerry with its client
When sending an email on one of the 3 first devices, it is saved locally but not always seen on the other devices. When she sends from the BlackBerry the email is always seen on all the other 3 devices. I configured her account on the different devices with IMAP so that she would have all the same emails visible on all the different devices.
Can someone suggest a possible error in my IMAP configuration?
Randomly she receives an error message: saying the IMAP server has closed the connection with error code 800CCCDD. The server provider say that they have found no record of errors on their server log.
Incoming messages are seen correctly on all the devices as expected.

Further the 2 Outlook 2016 account have a "Sent" folder and 2 "Sent Items" folder. the Outlook 2010 account has a "Sent" folder and only 1 "Sent Items" folder. Her emails get distributed between all 3 or 2 folders depending on the version.
Can anyone explain this to me?
Her volunteer work necessitates another email address which is similarly configured through Google G-Suites on the 4 devices. There is no problem seen with the sent emails as she is experiencing with her personal email address.
A direction to solve this would be appreciated.

Which folder is the BB using? Which folder are the other clients using? Outlook 2016 *should* use the send folder the imap server says the default.

Is Outlook 2010 saving to an IMAP folder? Preferably the same one the BB uses. 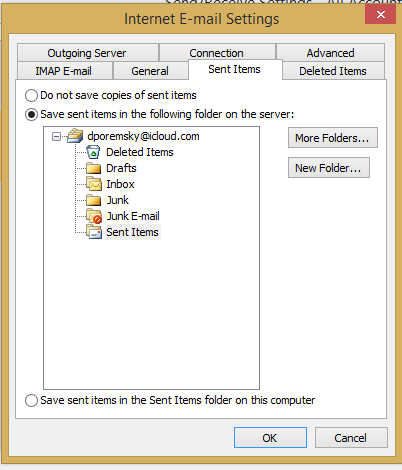 Diana: I believe that your image came from Outlook 2010 which the desk top computer is using. Previously I had not paid any attention to the Sent Items tab. I found it and noted that there was no clear folder defined so I specified the "Sent" folder. I saw that my sent emails being seen in the "Sent" folder on the SurfacePro with Outlook (Office 365).
I examined Outlook on the SurfacePro but being a different version, I could not find an equivalent tab to specify where to save sent emails. can you direct me to finding this?
Below is an image of the folders shown on the SurfacePro with Outlook 365. What governs the defining and inclusion of the Sent and 2 Sent Items folders? I could not find any reference to them as you have shown for the 2010 Outlook.
Note that the Sent and first Sent Items folders are sub folders of the Inbox and the second Sent Items folder is at the same level as the Inbox.

I am still trying to determine what App is being used by the BlackBerry to handle the email but it appears to be using the Sent folder as all of its originating emails are seen there by the other devices.
Thank for a beginning direction to solve this.

The newer versions of Outlook should use the sent folder the imap account designates. To choose a specific folder for sent items, open Send & Receive settings - Ctrl+Alt+S - then click Edit, select the account then Account Properties. This will open the Outlook 2016 version of the dialog as in the screenshot.

The ones under in the inbox look like a path was set to use the inbox as the parent (or removed) - this is used in some imap servers. It's set on the advanced tab in the dialog in the screenshot but should generally be left blank.

When you create folders in web access, where do they show up in Outlook?
Where are the folders that are under the Inbox when you look at web access? Under the inbox or at the same level?
Which Sent folder does web access use when you send a message from there? (Outlook 2016 should use that folder.)
N

Diane:
Web access: I am using RoundCube to handle the web access at the provider. All sent emails go into the Sent Folder and are seen in the Sent folder of all the other devices. The folders do not appear to be grouped under a parent. They are appear to be parents.
Below is an image of the folders with asterisks determining which will be visible for usage: 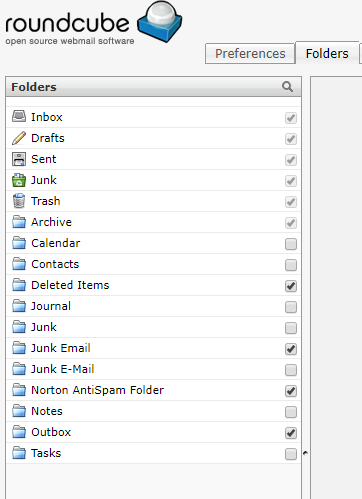 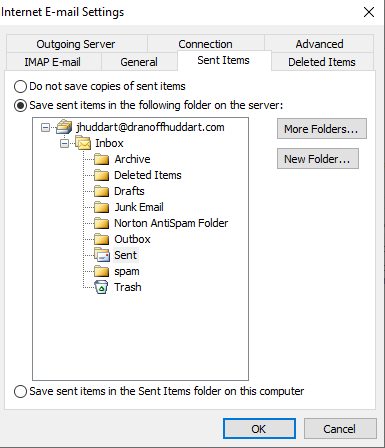 The other 2 devices have Office 365 installed with Outlook version 1907, Build 11901.20176. I am providing this specific information in case i wa wrong to use the designation Outlook 2016 before.
with this version I cannot get Outlook to save sent messages in a Sent folder. Outlook appears to generate its own local "Sent Items" folder to save sent messages. Since the other devices do not have a Sent Items folder, messages from this version of Outlook are never seen by any other device.
I followed your direction or using Ctrl+Alt+S to get to the Send & Receive settings screen as seen below: 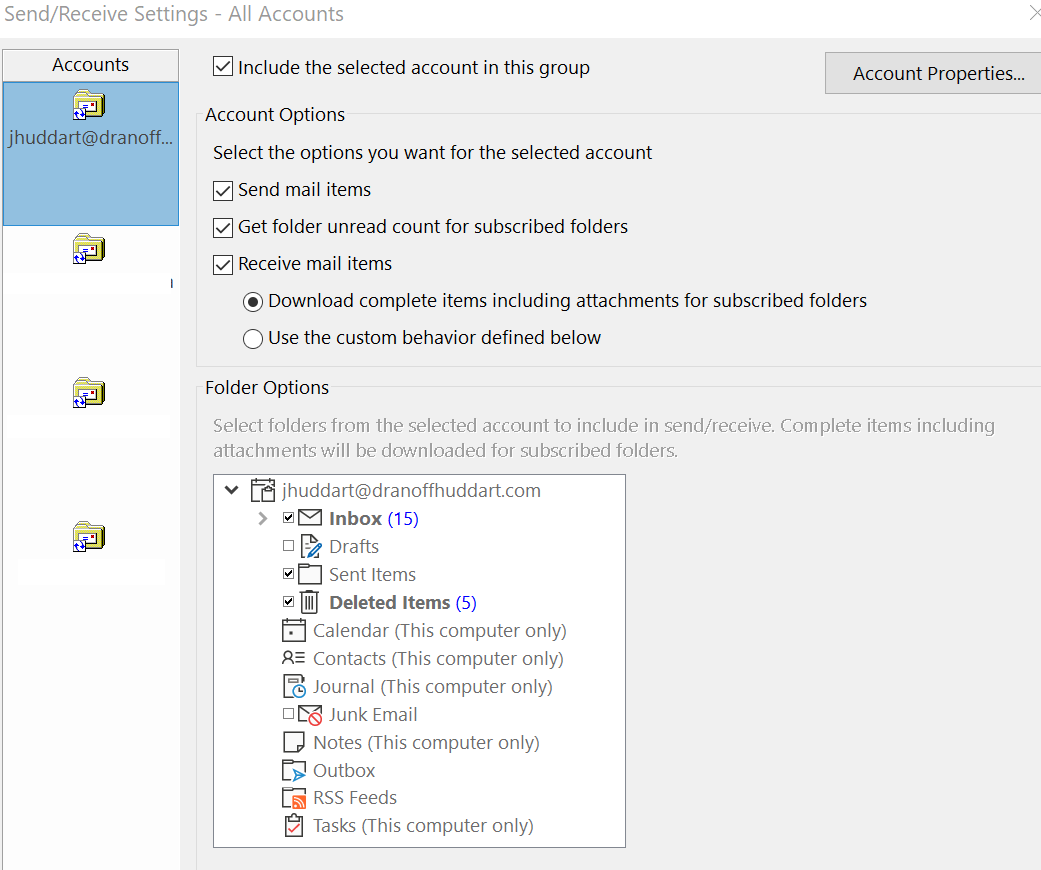 Then Clicked on Account Properties and saw this screen: 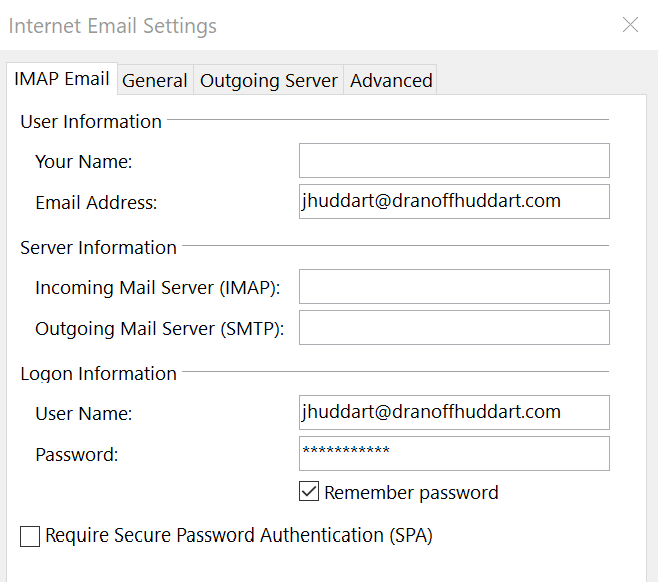 There was no Sent Items tab for me to select the desired folder.
What did I do wrong to not get the proper screen? Where do I specify that all sent emails be saved in the Sent IMAP folder?
On the Outlook 2016 version there is a Sent folder but it is empty. All sent emails are presently saved is the Sent Items folder which is not a child of the Inbox. This is, I think, a local folder and not part of the IMAP Folders and anything saved here is not seen by the other devices. There was a Sent Items folder originally under the Inbox but I moved its' contents into the Sent folder and deleted the now empty folder.

This is the outstanding issue now to have everything functioning properly. That is to have all sent emails saved in the Sent folder on all devices and versions of the email programs.
I have been wordy above but I wanted to be clear with my comments and hopefully resolve the issue. 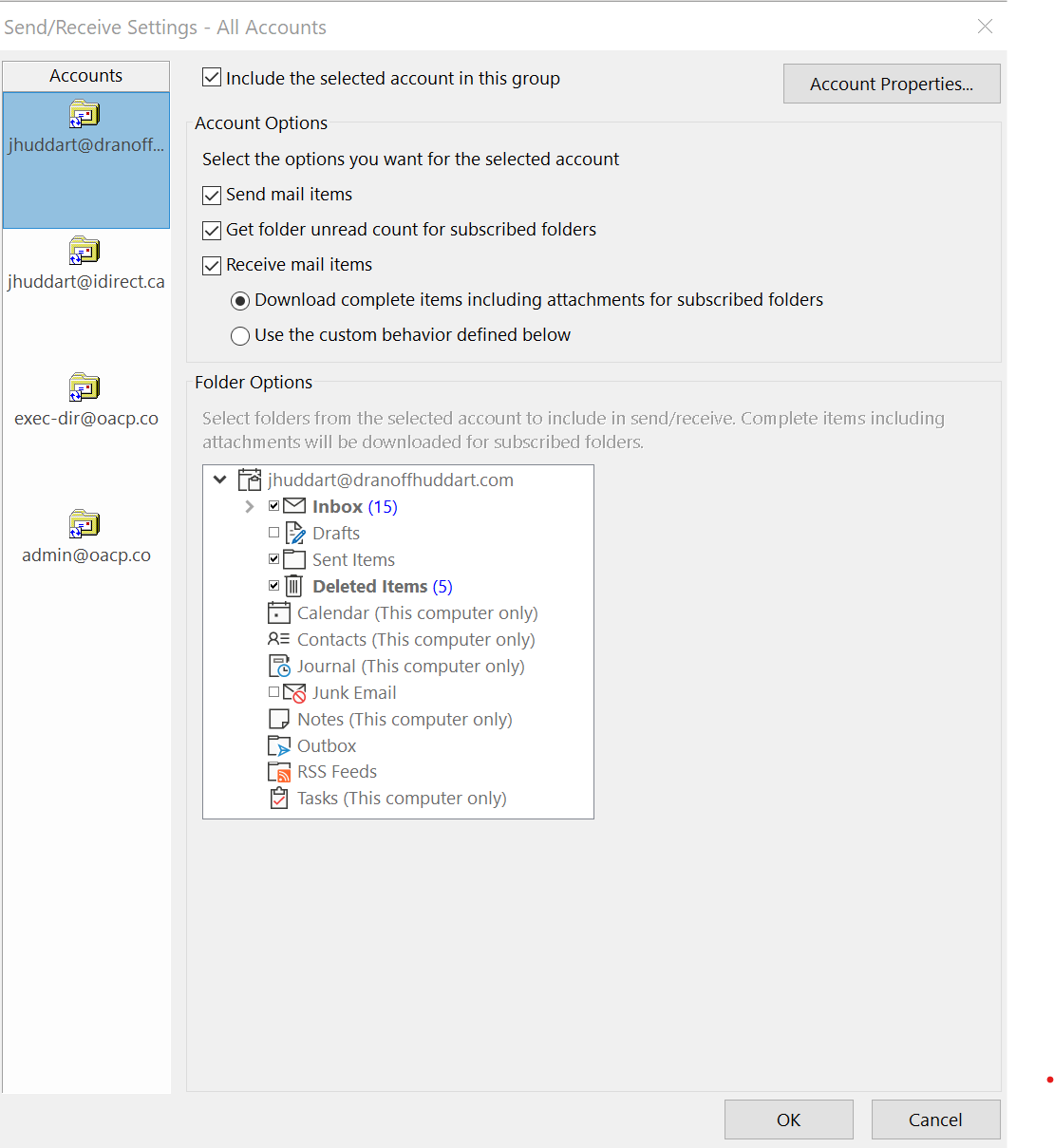